The damming of Arizona’s great rivers has made them a mere shadow of their old turbulent days. But still those irreverent rivers are plenty capable of kicking off their hobbles and running wild as a spring colt.

Personally, my favorite is the Gila. Its Spanish name translates roughly as “a steady going to or coming from someplace.” And that’s what the old river did for several thousand years, though today it is one of our driest rivers. Before it was dammed, it meandered across Arizona, sustaining a rich lifestyle for the Pima Indians, and before that, the prehistoric Hohokam. In time, Spanish missionaries and soldiers camped on its banks and Mexican vaqueros gathered wild cattle on its brushy floodplain. 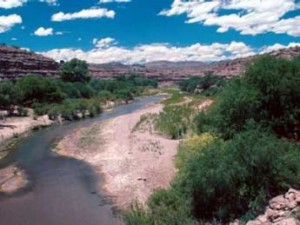 During the California gold rush would-be millionaires on their way to the promised land used to float down the Gila, saving themselves the hazards crossing the fearsome desert sands.

It’s been said that in 1849, a Mrs. Howard gave birth to a baby boy while floating down the Gila on a raft. He was named Gila, in honor of his birthplace, and the folklore has it that he was the first Anglo baby born within the boundaries of what would become Arizona.

Three years earlier, Lieutenant George Stoneman of the Mormon Battalion experimented with transporting military goods on the Gila. The raft, with Stoneman on board, was launched amidst as much a ceremony as one could manage in the wilds of Arizona. A short distance downstream the raft began to sink and Lieutenant Stoneman, a brave sea captain to the very end, went down with his ship, then walked ashore. As far as we know that was the last time there was any government sponsored navigation on the Gila.

…In 1885, the Thirteenth Territorial Legislature appropriated $12,000 to build a bridge across the Gila. The citizens of Florence were tired of the river’s fickle behavior.

No sooner had the bridge been built and dedicated when the irrepressible Gila changed its course, swung out into the desert and left that bridge standing all alone.

In 1930, the Bureau of Reclamation completed the construction of Coolidge Dam on the upper Gila. The bureau had researched the river thoroughly before deciding where the dam should be built. Unfortunately, however, the years reviewed in the study were unusually wet and a series of years after the dam was finished were unusually dry. Well, the Gila got stubborn and refused to form the reservoir that was supposed to take shape behind the dam. It took 50 years, in fact, for San Carlos Lake to fill.

Will Rogers, at the dedication ceremony attended by President Coolidge in 1930, looked at the grassy lake bed and said, “If that was my lake, I’d mow it!”