Why Doesn’t Arizona Have Daylight-Saving Time?

Excerpt from Valley 101: A Slightly Skewed Guide to Living in Arizona, a collection of Clay Thompson’s columns for The Arizona Republic. (Originally published Oct. 24, 1999.)

Daylight-saving time is an issue that sums up everything you really need to know about Arizona, namely that we are a contrary people and that it’s really, really hot here.

Daylight-saving time is one of those old standby issues that pops up every now and again, usually when the Legislature runs out of dumb ideas. They will argue about it for a while and then, refreshed and re-energized, think of a new dumb idea. It’s sort of like cleansing your palate between courses.

Daylight-saving time “adds” an extra hour of sunlight from April through October. It is meant to give you an extra hour for recreation and fun, wholesome or otherwise. We were once told that the driving force behind the federal Uniform Time Act of 1967 was the charcoal briquette industry. We don’t know if this is true. 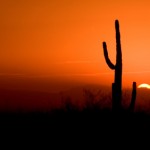 Anyway, as you may have noticed, we already have quite a bit of daylight in Arizona as it is, and it is daylight that tends to be on the warmish side. The idea of adding an extra hour of summer heat doesn’t make much sense.

This is not to say we haven’t tried it. In 1967, when the Uniform Time Act took effect, Arizona had a six-month fling with DST. Electric meters whirled like tops as people cranked up their air-conditioners during the extra hour of sunshine. Parents complained about tucking their tykes in while the sun was still shining. Owners of restaurants and drive-in movie theaters hated it. In general, it just made everybody grumpy, with the exception of bankers and stockbrokers, who liked being an hour closer to East Coast institutions.

Also, if you ever went back and read all the clippings and letters to the editor from past DST debates, you would find a certain spirit of “By gum, we don’t need a bunch of highfalutin Eastern sissy-boy bureaucrats telling us what time it is” running through them. We’re just ornery that way.

Bear in mind that a fair-size portion of Arizona does observe daylight-saving time. On the Navajo Reservation, clocks spring forward in April and fall back in October to keep the Arizona piece of the reservation in line with Navajo territory in Utah and New Mexico. But, with typical Arizona contrariness, state offices on the reservation abide by Phoenix time, while federal offices keep daylight-saving time. It makes for some confusion.

Actually, 1967 was not our first experiment in fiddling with the clocks. Along with the rest of the nation, Arizona observed DST during World War II. And for about 20 years around the turn of the century, Phoenix had its own time zone, a half-hour between Mountain Standard Time and Pacific Standard Time. The Southern Pacific railway operated its trains on Pacific time, and the Santa Fe railroad used Mountain time, so Phoenix and Maricopa County officials decided in the late 1800s to split the difference.

A newspaper story at the time opined, “The majority of the people don’t care what kind of time they have, just so they have as much of it as anyone else.’’