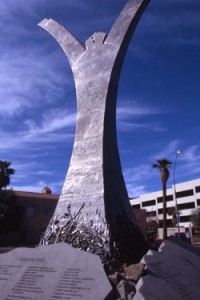 PHOENIX – It took Robert John Miley more than a decade to turn guns into art. The result is a sculpture that rises above a small park at the corner of Roosevelt Street and Central Avenue in downtown Phoenix. Miley spent 11 years acquiring the land, material and manpower needed to create the work. The statue, which resembles a man lifting his arms skyward, is made of steel and weighs 17,000 pounds. Four tons of the material came from guns that were once used in the commission of violent acts.

The guns were confiscated by law enforcement agencies across Arizona, then donated to Miley when they heard about his project. They were melted down and recast, some of them  back into the shape of guns that make up the base of the statue. Miley used students and criminals as his work force. The youngsters came from neighborhood schools; the convicts were members of chain gangs who volunteered to help. “The sculpture became a symbol of how we can transform anything into something good,” Miley said.

His work was not immediately accepted. One fellow artist noted that it “looks like Gumby,” but he also commended the piece later.