CultureDose of History
Home›Culture›Hustlers, Ladies and Whiskey: Leisure Time and Other Diversions in Old Arizona

Hustlers, Ladies and Whiskey: Leisure Time and Other Diversions in Old Arizona

Have you ever wondered how Arizonans spent their leisure time before the advent of lakes, fast highways, tailgate parties, single bars and health spas?

Don’t be fooled by those stoic faces in the old photograph albums. Leisure time might have been limited compared to today, but, if those plucky territorial folks knew something about the good old fashioned work ethic, they also knew how to have a good time. 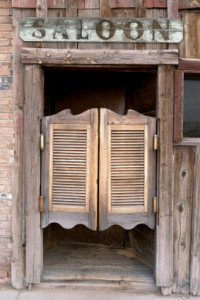 Arizona’s mining communities are a good source of information on early social life. Bustling towns such as Tombstone, Bisbee, Morenci, Globe and Jerome sprang up overnight. A few lucky entrepreneurs were finding the rainbow’s end and the rest were caught up in the excitement.

They had singles bars in those days too, but not the kind with which we’re familiar.

The population at first was overwhelmingly male. Soon after a prospector’s pick struck pay dirt, someone would arrive with a couple of barrels of whiskey and a two-by-four stick of lumber. The plank was stretched across the barrel-tops and the bar was ready for business. Next came the soiled doves with their tents and folding cots. Those two essentials seemed to mark the social beginnings of a rough-and-tumble mining camp.

The saloon was customarily a favorite social gathering place. Here, men could imbibe, take in a game of chance, or engage in a short-term love affair upstairs with one of the ladies of easy virtue.

More important, it was a place where one could catch up on the latest news of the day, meet up with someone from home, or strike up a profitable financial deal.

Not all the pockets of gold were located alongside narrow gulches. A good deal of it was found in prospector’s trousers. These opportunists performed with all the zeal of a snake oil salesman with a brand new concoction. It was called mining the miner, or separating some sucker from poke sack.

…During the 1890s, there were more than 600 saloons in the territory. Beer was brewed locally. However, most of the whiskey was imported from the “states.” Empty beer bottles, planted bottoms up, provided Phoenix with its first “paved” street.

Tucson had the Legal Tender and the Congress Hall. The latter boasted of a nightly shooting scrape. Clifton had the Blue Goose; and in Jerome, the Fashion. The Cowboy Saloon in Douglas was one of the rowdiest on the Mexican border. Globe boasted the Gold Coin and Pearce, the Bucket of Blood. Washington Street was where most of the Phoenicians gathered to imbibe. One establishment, the Palace, dubbed itself proudly “the only second-class saloon in the territory.” Some form of reverse advertising no doubt. Bisbee’s famous Brewery Gulch had saloons that ran all the way up Zacatecas Canyon. Old timers used to say the “further up the gulch you went, the rougher they got.” Prescott’s famed Whiskey Row had forty saloons going full-tilt in the early 1900s. Thirsty Yavapai cowboys, in town for Saturday night, attempted and sometimes succeeded in downing a glass of spirits in each before the night was through.