It’s not much to look at, just a hole blasted into a huge rock, but Clifton’s first jail is worth taking a look at because of a couple of notable details in its history. One deals with its construction; the other with its first occupant. 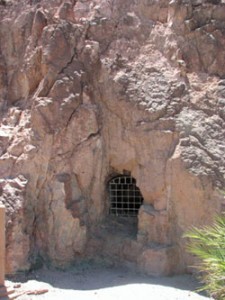 The jail was built in 1881. Actually, “built” is not a good description. It was hacked, hammered and drilled into a hillside made of solid rock. When completed, it was nothing more than a hole surrounded by rock on three sides and iron bars across the front. This made escape an extremely difficult procedure.

Local legend and a sign in front of the jail say the first prisoner was Margarito Verala, the man who blasted the jail out of rock.

When the job was finished, Verala converted his paycheck into large amounts of distilled spirits, shot up the town, was arrested and was thrown into the rock prison he had created. Neither legend nor sign say how long he was incarcerated or how long the jail was used.

The jail looks pretty much the same today as it did in 1881. It’s located across the street and a short distance north of the old railroad depot on Highway 191 as it passes through Clifton. It’s easy to spot because there’s a non-functioning railroad locomotive standing next to it.