Excerpt from Valley 101: A Slightly Skewed Guide to Living in Arizona, a collection of Clay Thompson’s columns for The Arizona Republic. (Originally published May 28, 2000.)

Q: Recently, I saw a house in Tempe that had large rocks on the roof. I mentioned this to a friend who had grown up here, and he said it used to be quite common, but he didn’t know why. Can you help?

A: Of course, sir. Help is our middle name.

Which is not to say we actually had ever heard of such a thing and, we blush to admit, when we first read your question we decided you perhaps had ingested some controlled substance. We felt much the same way early one recent morning when we groggily caught a glimpse of the haircut we had gotten the previous evening and, for an instant, wondered whether we had been eating peyote before telling the barber to cut it real short. We had not. 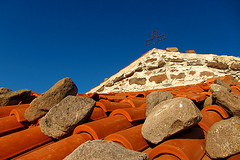 Example of rocks placed on roof. Photo taken by Nick Perez in 2010, posted on Flickr.

Rocks on the roof? Who to call but the estimable Max Underwood, professor of architecture at Arizona State University, a specialist in Valley architecture, and hail-fellow-well-met.

Underwood says your native friend is correct. Rocks on the roof can be traced to the Native Americans who lived here long before anyone dreamed of professional hockey and were adopted by homesteaders.

The idea is thus: During the day the rocks soak up the sun’s heat. In the cool of the night the rocks give off the heat and because hot air rises, the escaping heat would cause a kind of updraft that would help cool off the house.

There still are a few older houses around town, said Underwood, with good-sized rocks on their roofs, notably the Mitchell Park area of Tempe. And a colleague tells us she recently saw a new house, near 56th Street and Shea Boulevard, that had adapted this ancient technology.

We would have gone by to see it, but we were too occupied looking for a lawyer willing to bring suit for wrongful barbering.