Just about a half mile north of downtown Congress, the old frog squats in the desert sun on a hillside along Highway 89.  It still looks pretty good, considering that it has been in that same spot for more than 80 years.

Of course, there are certain features that set this particular amphibian apart. For example, it weighs an estimated 60 tons, stands 16 feet high and is solid rock. And it needs a facial every now and then. The frog, a Congress landmark, existed in its natural state as a brownish-gray boulder from prehistoric times until 1928, when it underwent a wondrous metamorphosis from rock to art. 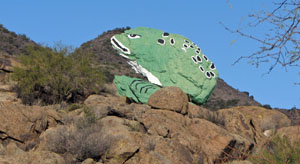 It was just another boulder perched on a side hill until Sara Perkins, a housewife, observed that if she squinted just right, the rock looked like a big frog. So she and her sons painted it green on top, white on the belly, added a mouth, eyes and spots and turned it into what became a tourist attraction. The Perkins family maintained and repainted the frog for years, and when they left the area, the citizens of Congress became the unofficial keepers of the croaker.

Now it gets a fresh coat of paint whenever the green fades because, as longtime resident George Carter once told me, “there ain’t much else around here to look at so that frog is pretty important to us.”

Sam Lowe is author of “Arizona Curiosities and New Mexico Curiosities” and is the Senior Travel Expert for Best Western International.