The Painted Rocks at Chloride

CHLORIDE – Up around here, the painted rocks are known simply as “the Mural.” Roy Purcell, the artist, called the work “The Journey” and says it was the result of a deep personal introspection. Either way, the decorated boulders have withstood the elements, bureaucracy and the multitude of tourists who travel a crooked mile to view them, photograph them, comment on them and attempt to decipher their hidden meaning. 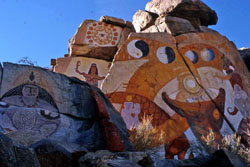 The Mural by Roy Purcell in Chloride.

The mural is both large and hard to reach. The granite boulders that served as Purcell’s canvas rise 75 feet above the canyon floor, and some of the painted figures are life-sized times four. The road to the site can easily turn the family car into a $950 repair bill. Tour buses can’t go there because the route resembles a path left by a giant serpent with the hiccups.

Purcell was working as a miner in 1966 when he converted the huge rocks into objets d’arte. Another miner grub staked the project by paying for supplies and scaffolding. Purcell used automobile paint so the colors wouldn’t fade and it worked. They’re still vibrant.

While painting one day, Purcell was ordered to stop by Bureau of Land Management agents because he didn’t bother to find out who owned the land. “So I stopped and ate my lunch,” he said. “Then they left and I went back to work. They didn’t say how long I was supposed to stop. I never heard from them again.”

Chloride is about 15 miles north of Kingman off U.S. Highway 93. The mural is 1.3 miles southeast of town. Follow the signs on the main street. The road is dirt and difficult but not impassible. Drive carefully and take your time. Those rocks have been there for millions of years. They’re not going anywhere.