McDowell Mountains Aren’t Blast from the Past

Excerpt from Valley 101: A Slightly Skewed Guide to Living in Arizona, a collection of Clay Thompson’s columns for The Arizona Republic. (Originally published August 31, 2001.)

Q: I have a nice view of the McDowell Mountains. Sometimes they look like a mountain range, and sometimes, in certain light, they look like a group of individual volcanic cones. Which are they? 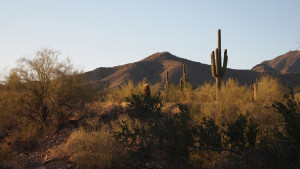 A: I have in my pile a fair number of volcano questions that have come in over the months. I never seem to get around to answering them, usually because they involve terms such as “Cenozoic Laramide gneiss,” and I get tired just thinking about stuff like that.

However, there was pie for breakfast today, so with firm purpose and cheerful mien we shall now take up this matter of the McDowells. According to one of my favorite books, Roadside Geology of Arizona by Halka Chronic, the McDowells are “rocky hills (that) protrude through the gravel,” so I guess that means they are not mountains
or volcanoes, just rocky hills. I suppose we should call them mountains anyway because the McDowell Rocky Hills wouldn’t be much of a name.

On the other hand, Halka Chronic is a great name, don’t you think? According to Chronic, the McDowells are mostly composed of Miocene stream deposits. Miocene is the fourth epoch of the Tertiary Period in the Cenozoic Era. Really. I looked it up. The Miocene was between 5 million and 24 million years ago.

Arizona has many volcanoes, but none of them obviously are doing much right now. The Superstitions were once part of a whole complex of volcanoes. The San Francisco Peaks near Flagstaff are volcanic and so are many other mountain ranges around the state. In fact, the Grand Canyon was created by a volcano. Not really. I just wondered if you were paying attention.

Sunset Crater, just north of Flagstaff, might be one of Arizona’s newer volcanoes. It is a cinder cone, a great big pile of ash and cinders that piles up around a volcanic vent. It blew about 1,000 years ago, the blink of an eye, Cenozoically speaking.