Old Arizona’s “Ladies of the Night”

Just before the turn of the 20th century, the “ladies of the night,” or “soiled doves,” ran booming businesses in old Arizona boom towns such as Jerome, Morenci, Tombstone and Bisbee. Marshall Trimble, Arizona’s official historian, offers a glimpse into this taboo profession in his book, In Old Arizona.

(Excerpt) There was a limitless market–selling intimacy to lonely love starved men. These colorful lades bore a litany of picturesque nicknames such as Squirrel-Tooth Alice, Crazy Horse Lil, Frenchy Moustache, Lizette the Flying Nymph, and last but not least, Little Gertie, the Gold Dollar. These aliases weren’t just to camouflage identity but usually referred to some unique characteristic the lady possessed. As long as the town prospered, they stayed, but when the mines played out they were among the first to sense the economic crisis and move on. 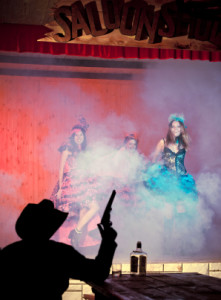 Reasons for entering the profession were as varied as the women themselves. Some came from respectable families, while others were escaping from malevolent husbands. Some became prostitutes as a lark or some sense of adventure, while others were forced into it. A few lucky ones married some respectable gent and left the profession. Others went into business for themselves–some even became quite wealthy. Most, however, fell victim to the hazards of the trade, becoming strung out on drugs, booze, or died and were buried in lonely, unmarked graves.

Public acceptance can be fickle and these ladies were, at first, welcomed by love-starved men. But, as the community matured they were ostracized and restricted to “districts.”

Those notorious shady ladies sold companionship in a variety of settings ranging from ramshackle cribs to opulent mansions. In saloons and burlesque theaters, they were required to mingle with the customers and hustle drinks when they weren’t performing. Tombstone’s Bird Cage Theater, located on the south side of Allen Street, was typical.

The evening’s entertainment began with a variety of burlesque shows titillating the audiences with risque vaudeville acts. Private booths with drawn curtains in the balcony were reserved for the big spenders. A stairway backstage leading up to the balcony allowed the girls the opportunity to earn an extra few dollars for a few intimate moments behind closed drapes.

Between performances, the girls worked as waitresses. For each round of drinks she received a token worth one bit (12 1/2 cent). At the end of the evening, she could redeem her tokens for cash.

As the evening wore on, the chairs and tables were moved back against the walls and the place was turned into a dance hall.

Allen Street was the main thoroughfare through town, and during the day, the early 1880s was one of Arizona’s most notorious bibulous Babylons.

Allen Street, like the town itself, had a split personality. The south side was devoted to respectable businesses such as stores and restaurants. But the north side of the street was hell with the lid off. The sounds of boisterous laughter, rinky-tink piano music and the spinning of roulette wheels could be heard twenty-four hours a day.

Respectable women were afraid to walk down the dusty boardwalks on the north side for fear they might be mistaken for the opprobrious Blond Marie, Dutch Annie or Rowdy Kate.