SUPERIOR – The town square in Superior isn’t very big. In fact, it’s not even a square; it’s a triangle. A small triangle. So small that if it weren’t for the statue, there’s a good chance nobody would ever notice it. But the statue’s there and it gives the square triangle purpose. It’s called “The Helping Hand,” and it depicts a man reaching down to assist a friend. It was hewn from a 15-ton chunk of dacite by a reluctant sculptor named Tom Macias. 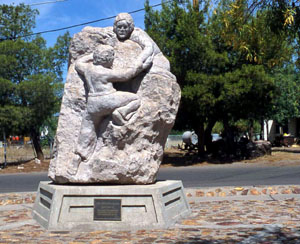 The Helping Hand sculpture in Superior depicts a man reaching down to assist a friend. Photo Credit: Sam Lowe

Back in 1982, the community was making plans for its centennial and somebody suggested they should create a sculpture. Macias, who had some art training but not much, didn’t volunteer for the task but a friend volunteered him.

“Before I could refuse, I was involved,” he said later.

A geologist found the perfect rock out in the wilderness, Kennicott Mining Company hauled it into town on a flatbed and dumped it in front of Macias’ house. He had to get a front end loader to stand it upright, then began working with the simplest of tools — a hammer and a couple of chisels. And he was expected to have the sculpture finished in 75 days. At midnight on the eve of the dedication ceremony, Macias was still putting on — or taking off — the finishing touches. But he got the job done. And ever since, the statue has been a prominent fixture on the town’s main street, just north of U.S. 60.