State nicknames like this are commonplace around the nation, and many of us thought the massive hole that juts through the northern part of our state supposedly gave us our moniker. Yet it turns out, this isn’t our official nickname, and a crafty little girl from California brought it to light. 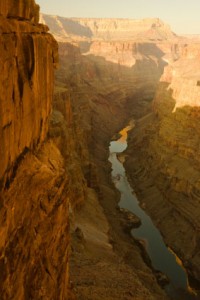 Earlier this year, a fifth-grade student from the Golden State, Victoria Smith, was in the midst of an American history report on the State of Arizona when she couldn’t find our “official” nickname. To solve the mystery, she contacted Arizona Oddities’ own Marshall Trimble, the state’s official historian.

“I had several nicknames in my head including, Baby State (until 1958), Valentine State, Sand Hill State (go figure), Copper State, Sunset State, Apache State and Grand Canyon State,” he said. “I contacted the Secretary of State’s office and state library archives and came up empty on an official nickname. Finally, we checked the statutes, and there was no official nickname. I promised the little girl I would go to work on ‘Grand Canyon State.’”

And that was it. Marshall was on it. With the help of State Rep. Sam Crump, he introduced a bill this past year to make Arizona the “Grand Canyon State.” It passed the House by a vote of 53 to 2. It was sent to the Senate, but Senate President Robert Burns was holding up all bills until the budget passed.

Then, just before the session ended, legislators rushed a load of bills through (including the selling of fireworks and carrying a concealed weapon into bars), but ignored the Official State Nickname Bill.

And that was it. The bill died. Marshall had to break the news to little Victoria, who was going to receive an invite to the bill signing.

However, it’s apparently not over for good. Marshall says Rep. Crump plans to re-introduce the bill in January 2010. Look forward to Arizona, the “Grand Canyon State”… coming soon.