Tribute to a Fallen Earp

Western movies never mention him, but there was another Earp sibling involved in Arizona’s history. His name was Warren and, unlike his three more famous brothers, he didn’t survive his gunfight. 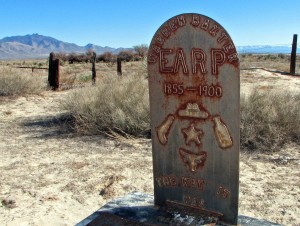 Warren Earp was shot and killed in 1900 at the Headquarters Saloon in downtown Willcox. According to area historians, he worked on a local ranch and got into an altercation with Johnny Boyette, a cowhand with the same outfit. The story goes that Earp bullied his coworker into the shoot-out that ended in his death. When it was over, authorities discovered that Earp wasn’t carrying a gun, only a knife. But because the victim did have the knife in his hand at the time, Boyette was acquitted on the grounds that it was self defense.

Warren’s brothers, Wyatt and Virgil, allegedly showed up in Willcox a short time later and Boyette mysteriously disappeared about the same time. Nobody in Willcox says the brothers had anything to do with the disappearance, but “draw your own conclusions” is a common response to inquiries into the matter. And, although he never made it as a great historical figure, Warren Earp does have a legacy called Warren Earp Days, an annual convention  for Western writers held in Willcox every July. Also, a plaque commemorates the shooting at the former saloon (now a clothing store) and a welded steel marker has been erected at his grave site in the Old Cemetery south of the city.