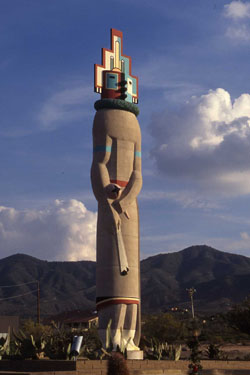 CAREFREE – The world’s largest kachina is a 39-footer that stands guard over the Tonto Hills subdivision about several miles north of downtown Carefree. This giant Hopi legend weighs 14.5 tons and took four months to complete. E.V. Graham, the subdivision’s developer, had it built as an inducement to get his wife to move onto the property, which at that time was way out in the country.

The statue, located on Old Mine Road off the Carefree Highway, is composed of nine concrete sections. They were poured beforehand, then assembled and painted on the site.  Designs of Hopi-raised vegetables were cast into the base of the figure, accurately indicating the four points of the compass.

The work was designed by Philip Sanderson and engineered by Carl Ludlow, both of Phoenix. And here’s the best part – there’s no admission fee to view this man-made wonder.