Quartzsite’s Legend of A Camel Driver

QUARTZSITE  – The thing most people notice right away when they enter the Quartzsite Cemetery is a stone pyramid topped by a copper camel, and there’s quite a story behind its presence. The cairn marks the grave site of a man they called Hi Jolly, who came to this country in the 1860s to act as a camel driver for the U.S. Army during an ill-fated attempt to use the animals as beasts of burden for military purposes in the deserts of the Southwest. 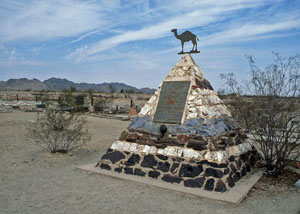 His real name was Hadji Ali, but the soldiers had trouble pronouncing that moniker so they shortened it to Hi Jolly. He served with the Army until the camel experiment was abandoned and the camels were either sold off to private enterprises or turned loose on the desert. One of them became known as the Red Ghost and allegedly stomped a woman to death, and the Hi Jolly legend says that when he died, he was out in the desert hunting for the renegade animal. Before his death, he bought some of the camels and operated a freight line along the Colorado River but it failed so he turned to prospecting and, like so many others, never got rich at that, either.

He died in an old rock cabin near Quartzsite in 1902, but his memory is preserved every year when Quartzsite stages Hi Jolly Days and Camelmania in his honor.