Saguaros Refuse To Tell Their Ages

Excerpt from Valley 101: A Slightly Skewed Guide to Living in Arizona, a collection of Clay Thompson’s columns for The Arizona Republic. (Originally published September 15, 2002.)

Today’s question is about the saguaro, so those of who you have lived in Arizona for more than a few years are free to talk quietly among yourselves or put your heads down on your desks and rest a bit.

The rest of you, the newcomers, should pay careful attention because, like indicting a governor or driving badly, few things are more purely Arizonan than the saguaro, the bloom of which, after all, is our official state flower. 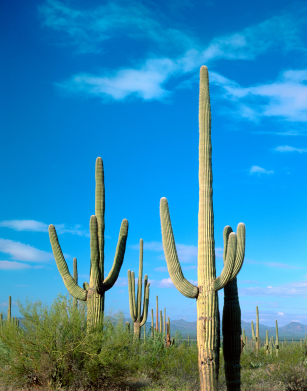 Would a major corporation be less likely to move here if our state bird were the roadrunner instead of the cactus wren? I suppose there’s no harm in it; I just don’t get the point.

Today’s question: You can tell how old a tree is by counting its rings. How do you determine the age of a saguaro?

“You don’t,” according to the inestimable Patrick Quirk of the Desert Botanical Garden in Phoenix.

Saguaros don’t have growth rings, so “there is no reliable way to date their age except in a very broad range,” Quirk said. “A saguaro in Tucson might be twice as big as one in Yuma but the same age.”

You could make a few good guesses at the age of saguaro, but mostly everything depends on growing conditions. The cactus in Tucson would get a lot more rain than the one in Yuma.

Saguaros, as even you newcomers must know, grow very, very slowly and can live to be 200 years old or older.

But I didn’t know this about them. I found it on the Arizona Sonora Desert Museum’s website. It turns out that saguaros, which we think of as eternal symbols of the desert, are relative newcomers to the area. For about 10,000 years, since the last ice age, they have been expanding their range into these parts.

The fossil record shows that saguaros didn’t hit the Tucson area until about 8,000 years ago, which means there were people in the area before there were saguaros. That’s kind of interesting, don’t you think?