Out of a frontier history that lasted more than 350 years, Americans have taken the era of the open-range cowboy, a brief 20-year span, given it immortality and called it the West. The heroic figures who emerged have come to symbolize all the manifestations of character we ascribe to the winning of the West. Most important, those qualities have come to represent our perception of our own self-image as rugged individuals.

The cowboy image universally epitomized the highest and most honorable qualities of mankind, outdoors, freedom, individualism and defense of the oppressed. The cowboy has been romanticized, lionized, analyzed and psychoanalyzed. We have the singing cowboy, drugstore cowboy, Coca Cola cowboy, rhinestone cowboy, tragic cowboy, urban cowboy and instant cowboy. One answer might be that in a society growing more impersonal, with urbanization and computerization rapidly closing in, people instinctively yearn for a sense of place. Solace is found in a vicarious reliving of those simplistic days of yesteryear. 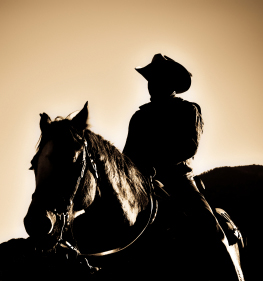 Today’s instant cowboys and their silver-buckled bunnies strut around in embroidered, tight-fitting shirts, designer jeans tucked into $300 lizardhide boots, boots with pointed toes (good for two things only—squashin’ cockroaches in corners and kickin’ snakes in the fanny). The cowboy’s most distinguishable feature, the hat, has been corrupted with enough feathers to do honor to a Sioux warrior. This creeping faddism has encroached into the sacred sanctuaries of modern, real, working cowboys. Prices for Western apparel have gone sky-high. Working cowpunchers, in town for some social imbibing and dancing, cannot afford the ludicrous prices in the cowboy discos that have sprung up. It’s said, with some truth, that if you walk into the old Palace Bar, on Prescott’s Whiskey Row, on a Saturday night, expecting to see working cowboys, look around, and if you see a feller wearing tennis shoes (tenny-lamas) and a baseball cap—he’s likely to be the only real cowboy in the joint.

Traditionally, cowboys were noted for being long on aspiration and short on cash. Wages usually amounted to a dollar a day and all the beef and beans they could eat. Still, they considered themselves aristocrats of the working class. It was said “all you needed to become one was guts and a horse, and if you had guts, you could steal a horse.” Fire-eating young heroes came West from all parts of the world and from all walks of life, aspiring to become cowboys. Some succeeded and fulfilled the dream held by virtually anybody who ever read a Beadle and Adams dime novel.

Their brash, rebellious years were brief; a couple of decades made them immortal. There was an aura of romantic mystique and daring that clings to them still—flamboyant figures bigger than life, they are considered by many to be America’s last grand image—the idol of an age turned to legend—a timeless symbol for a frontier panorama.