CultureDose of History
Home›Culture›The Cowboy Mystique (Pt. 2): The Story Behind the Garb

The Cowboy Mystique (Pt. 2): The Story Behind the Garb

In The Cowboy Mystique Pt. 1, Marshall explores the perceptions and realities of the “cowboy.” In this post, he discusses the unmistakable garb – what it is, and how it came to be.

The Arizona cowboy was a curious mix of the northern Plains, Rockies, California, Texas and northern Mexico cowboy culture. The influence of all these was strong, yet the Arizona cowboys, or vaqueros, evolved into a unique breed of their own. In a frontier that was closing rapidly at the turn of the century, Arizona offered one of the last vestiges of the freedom that was associated with being a cowboy.

Perhaps the cowboy’s most distinguishable features were their widebrimmed Stetsons, sometimes called the “John B” in honor of the manufacturer. In the Southwest, it was sometimes referred to as a sombrero from the Spanish word sombra, meaning shade. Like their other trappings, the hat was multi­purpose. It served as a water pitcher for them and their horses, to fan fires, and it kept the dust, sun and rain off their heads. They used to say, “humans dress up, but a cowboy dresses down.” The hat was the first thing a cowboy put on when he got up in the morning and the last thing he took off at night. The high crown gave him the opportunity to “personalize it” or style its shape to his own liking. Expensive hats were a status symbol, and a good one would cost the better part of a month’s pay. But they were so durable they lasted for years.

Most cowboys donned a pair of chaps when working cows in rough country. The name chaps is derived from the Spanish word chaparejos which meant “leather breeches.” They saved wear and tear on a man’s overalls, kept him warmer in winter and protected him from rocks, cactus and thorny bush. A few wore “hair pants” or angora chaps made from goat skin and worn with hair side out. Many preferred the Mexican “shotgun” chaps. These leggings fitted snugly around the legs and were more like a second pair of pants. They were decorated with a leather fringe on the pockets and sometimes had silver conchos running down the legs. When riding in bush country, however, the chaps with the silver conchos remained in the bunkhouse, as the cowboy didn’t want to lose them in the mesquite. 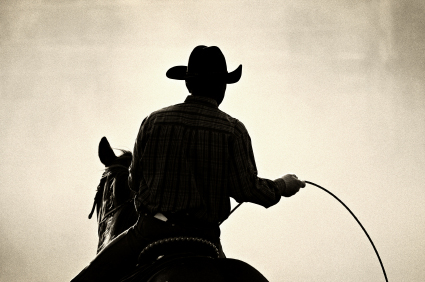 The batwing type was probably the most popular. They were held on with snaps and didn’t fit so tightly. Their shape, along with their big flapping leggings, gave them their name.

Trousers worn by the working cowboy were the heavy, blue denim “Levis,” when they could get them. Otherwise they wore woolen “California pants.” The tighter the fit, the better. Tight pants, especially across the seat, meant less wrinkles to cut into the fanny. Long hours in the saddle caused the crotch to wear out first. One was able to prolong the use by stitching a large leather patch over the worn out part. Shirts were long-sleeved, colorless and made of cotton or flannel. Since there was little pocket space in the trousers, they carried essential items, such as cigarette makings, in a many-pocketed vest which was usually worn unbuttoned.

Knotted around the neck was a brightly-colored necker­chief or bandana. Most preferred the former, saying that bandanas were for fanners. The neckerchief, not only served him as a “range necktie,” but it also gave protection from sun and windburn. Worn as a mask, it was a dust filter in a storm or riding drag and could be used as a wash towel, tourniquet or sling.

Boots were of a high-shafted, two-inch heel variety, not for show, but to keep their feet from pushing through the stirrups. Those boots weren’t made for walkin’, but then they didn’t plan lo do much walkin’ anyhow. Cowboys did not invent the high-heeled boot. They have been in use since the earliest Asiatic horsemen. No expense was spared when purchasing a pair. It was not uncommon for a man earning $30 a month to spend $40 on a pair of custom hand-crafted boots made of leather so line you could “see the wrinkles in yer socks.”

Another distinguishable feature of the working cowhand’s rigging were his spurs. Spurs were sometimes worn as orna­ments for show, but were more important than reins when it came to maneuvering a cowpony—to signal quick action when working cows or getting over rough terrain. They weren’t used to inflict pain, but more as a reminder, usually a simple movement of the leg was all that was required to get the message across.

The working cowboys were mighty particular about their “hoss jewelry,” especially their saddle, after all, they spent the greater part of their waking hours seated upon it. The ranch might furnish the horses, but the saddle was nearly always the personal property of the cowhand. A good one cost about a month’s wages and was worth more in dollar value than most of the horses he rode. There was a great deal of truth in the saying “a cowboy rode a $10 horse and sat on a $40 saddle.” It was so much a part of the trade that “sellin’ one’s saddle” was a phrase used to describe getting out of the business for good.