CultureDose of History
Home›Culture›The Cowboy Mystique (Pt. 3): A Cowboy Isn’t a Cowboy Without His Horse

The Cowboy Mystique (Pt. 3): A Cowboy Isn’t a Cowboy Without His Horse

In The Cowboy Mystique Pt. 1, Marshall explores the perceptions and realities of the “cowboy.” In Pt. 2, he described the story behind the unmistakable garb. In this post, he discusses a cowboy’s best friend — his horse.

It was not the cow that made the cowboy; it was the horse. In the early days, it was a range mongrel known as the mustang, those sturdy, unpampered descendants of the Spanish breed that were the greatest contributors to a cowboy’s self-image. There was an aura of aristocracy, shared by the fraternity of horsemen, that bridged all cultures.

The U. S. Cavalry felt a strong sense of superiority over the foot soldier, as did the horse Indian who considered fighting on foot as degrading. To the Spanish, a caballero was a gentleman on horseback and chevalier and cavalier meant the same to the French and British, respectively. To the cowboy, “sitting on the hurricane deck of a cowpony” made him a member of the same elite fraternity—”Nature’s Noblemen,” cowboy artist Frederic Remington called them. The horse was the apparatus on whom the cowboy and the range cattle industry depended for survival. Without them it would have been impossible to gather, rope, brand, drive the millions of critters to market, which was what the range cattle industry was all about. 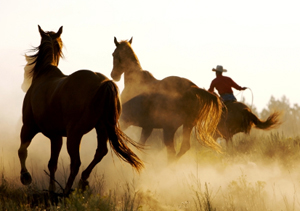 Those old-time cowponies were not the well-bred animals seen at rodeos and at most working ranches today. During the 1600s, the Plains Indians captured a few barbs and Arabs from the Spanish, and built an entire culture around them. Not much larger than a pony, they weighed only 700 to 900 pounds and stood 12 to 14 hands high. Called range mongrels, they looked more like a scrub of no particular parentage, but appearances are belying; they had undergone many changes through generations of adapting to the demands of their environment. Those broncos used by late 19th-century cow­boys did not necessarily descend from the mustangs of the Great Plains as is often believed, but came from northern Mexico instead. Generally, the Hispanos were more particular about breeding good stock than the Indians, and it is likely they were the progenitors of the American cowpony. The sires were well-chosen for their bloodlines and confirmation and were not subjected to the long, hungry winters that stunted the growth of the wild horses on the Great Plains.

Most cowboys regarded horses as a necessary tool of the trade and nothing more. However, extraordinary cowponies were held in high regard and provided the inspiration for much bragging during “lying hour” around the bunkhouse. Tall tales abounded about the prowess of cutting horses that could spin and turn quicker’n a cowbrute could duck or dodge, and the term “horse sense” subsequently has become a part of the English language. It was said by many that they knew more than their rider when it came to doing the right thing at the right time. Good cow horses in an outfit were sometimes better known and longer remembered than the men who rode them.

Most had been ridden only four or five times by a bronc twister when they were turned over to the cowboy to tone up the rough edges and had to be blindfolded before being mounted. One old-timer described one of these experiences: ‘The horse changed ends under me and was, before I knew it, going the other way.” Another said that “some of the snuffy cayuses in his string galloped a little high. The trick is to keep falling off and climbing back on again until the horse becomes bored.” To meet one’s shadow on the ground, in a land where you could look further and see less, a man left afoot had about as much chance as a one-legged man at a kickin’ contest. It was said that the only thing a cowboy feared more than being left alone in a room with a decent woman was being left afoot in the middle of nowhere. The plight of a cowboy who was long overdue back at the ranch would be discussed in relation to what particular horse he might be riding. If it was a dependable one, nobody showed much concern. However, if the horse was “green,” the available hands would ride out to look for the rider.

When a horse was sick or lame enough to call a horse doctor out, the monetary value of the horse was never a topic of discussion, nor did anybody ask how much the treatment would cost. The only thing that might be said was “save him if you can.” Most of the talk centered around what a good horse he’d been, how much he’d helped the ranch and his exploits on the range. Good horses are as important to a working ranch today as years ago. Some outfits buy their replacement horses from sale barn auctions or by treaty, while others do their own breeding. There’s an old adage among cow-bosses that good horses will go a long way towards holding a man to an outfit.