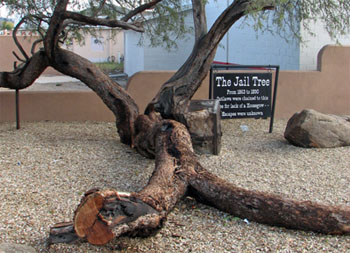 Tree once used as a jail. Photo Credit: Sam Lowe

WICKENBURG – Right in the middle of downtown, there’s an old mesquite tree that folks around town say has been there longer than anyone can remember. Local historians who check into such things say it’s more than 200 years old, and claim they have evidence to prove it. They also say it once served as the community’s only jail.

A sign next to the ancient tree supports the claim. It says: “From 1868 to 1890, outlaws were chained to this tree for lack of a hoosegow. Escapees were unknown.”

The tree, located at the corner of Highway 60 and Tegner Street, is now the centerpiece of a pedestrian walkway that was dedicated in 2003.