YUMA – Most communities adorn their water towers and tanks with either the town’s name or first initial, but in Yuma they opted for something more artistic — a giant triptych that spreads across the city’s three huge water tanks. The city council received gallons of flak when it approved the $50,000 project in 1999, but the criticism died down a year later when the work received an award from the Governor’s Pride in Arizona Committee. 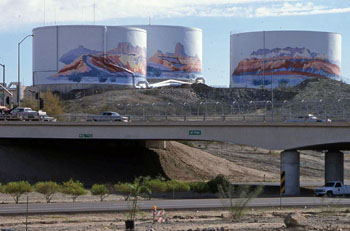 The big murals were designed and executed by Tucson artist Tim Merrick, who called the work “The Rio Project.” The tanks each hold three million gallons of water and handle about 50 percent of the city’s water supply every day. They sit on a hilltop overlooking Interstate 8 and Sixteenth Street. There’s no charge for looking at them, but art lovers and gawkers alike should not slow down on the Interstate to examine them because the guy in the semi behind them might not share their appreciation for the finer things in life.