CultureDose of HistorySmall Town Scene
Home›Culture›Arizona Place Names: A Slew of Cities and Counties with Spanish, Indian and Random Origins

Arizona Place Names: A Slew of Cities and Counties with Spanish, Indian and Random Origins

Ever since man first set foot in this land called Arizona, he has felt compelled to name every river, waterhole, mountain pass and trail. Inspiration was usually drawn from great natural spectacles and awesome beauty, but not always. Among Arizona’s fabulous mineral laden mountains lie the skeletal remains of storied ghost camps of yesteryear, born in boom and died in dust, the fragile wooden walls, concrete ruins, monuments to hopes and aspirations that didn’t always pan out.

These ghostly reminders of the past were generally populated by a variety of boisterous, rough and tumble miners generally characterized as unmarried, unchurched, and unwashed. They named their temporary abodes after former hometowns or countries, girlfriends, local geography, dappled with a liberal touch of tongue-in-cheek humor.

Others came to the land, promptly renamed or corrupted the original name to better suit their own linguistic abilities. Tucson gets its name from the dark base of nearby Sentinel Mountain. The Papago Indians usually named their communities for some conspicuous geographical feature and called their village at the foot of the mountain, Chuk-Shon. The Spanish pronounced the name Tuqui-Son, which eventually evolved into Tucson. 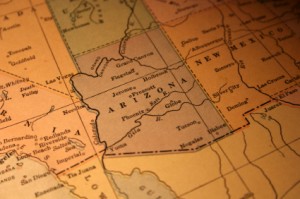 When the early Spanish interlopers asked the river people living along the Gila what they called themselves, the response was “Pirn,” meaning roughly, “I don’t understand.” The Spanish interpreted “Pirn” to be the name of the tribe and the Akimeel Awatam or “River People,” became the Pima. A similar incident occurred at the confluence of the Gila and Colorado rivers. When the Spanish asked to parley with the “Chief,” a young man stepped forward, pounded his chest and replied, “Yuma,” which meant “Son of the Chief.” These people, who called themselves the Quechan are still more familiarly known as the Yuma Tribe and have a city and county named in their honor.

The Apaches‘ name for themselves was “Dineh,” meaning “the People.” Apache was a name coined by the Zuni people and popularized by the Europeans. The word means “enemy.” Navajo comes from similar origins. Closely related in the Apaches, they were dubbed “Apaches de Nabahu,” or “Apaches of the cultivated fields.”

The Spanish weren’t the only ones guilty of misinterpretation. Sometimes lines of communication falter between peoples of the same language. During the 1880s Henry Mortimer Coane became postmaster of a small farming town in the Verde Valley. As was often the case in the birth of a community, the postmaster named the place after himself. In a letter to postal authorities, Mr. Coane suggested the name Coaneville. Somebody in the nation’s capital misread the
name and officially dubbed the town “Cornville.”

Down near Organ Pipe National Monument is a junction in the highway. These junctions are usually referred to as “Y’s.” In this case, one road led toTucson, another to Ajo and a third to the Mexican border. When postal authorities asked the folks living at the junction what they wanted to call their community, the response was an emphatic “Y.” Something was lost in the translation and with a wisdom known only to the bureaucratic minds of officialdom, the name was
approved in Washington giving birth to the town of “Why,” Arizona. To which some local wag no doubt responded, “Why Not?’

Eloy is derived from a Syrian word “Eloi,” meaning “My God.” “My God” is one of those expressions that has many meanings, depending on one’s emotional response to a situation. If the Syrian who had decided to settle in the area had stepped down from the train in the middle of August, there is little room for doubt as to the intent of his descriptive response.

There are names that might be categorized in the Department of Redundancy-Redundancy. The Spanish attached descriptive names to the landscape such as Mesa and Picacho. English speaking people came along and thought the words to be pretty and interesting but not quite descriptive enough. So Mesa became “Table Mesa,” and Picacho became “Picacho Peak.”

Many of Arizona’s communities have misleading names. Pinetop was not named for the famous ponderosa that abound in the area, but for a tall bushy-headed bartender who operated a saloon there in the 1890s. Snowflake was named for the Mormon Apostle Erastus Snow and early day colonizer Jacob Flake…

Arizona’s best known acronym is the range of mountains in Yuma County called the “Kofas.” Kofa stands for King of Arizona—an early day gold-mining operation in the region. The state has been called a land of anomalies and tamales, referring to the many different people and diverse landscapes. There are times when Arizona registers the nation’s high and low temperatures on the same day. People have been known to snow ski and water ski on the same day. There are anomalies in place names too. The town of Pima is not located in Pima County, but is in Graham County. The town of Maricopa is found in Pinal County. To make matters even more confusing, the community of Navajo resides in Apache County while Fort Apache is in Navajo County.