Did You Know Lizards Can High-Tail It On 2 Legs?

Excerpt from Valley 101: A Slightly Skewed Guide to Living in Arizona, a collection of Clay Thompson’s columns for The Arizona Republic. (Originally published October10, 2001.)

Today’s question: I was at Lake Pleasant recently, and I thought I saw a lizard running across some rocks as fast as can be upright on its back legs. Was I hallucinating?

I don’t know. Do you hallucinate often? I was waiting at a stoplight once and thought I saw Mr. Peanut—you know, the Planters peanuts guy — in the next car. I thought I was hallucinating, but when I looked again, it really was a guy in a Mr. Peanut costume. I wonder where he got it. That would be a pretty cool thing to have.

Anyway, no, you were not hallucinating, at least not in this case. Nor should the idea of coldblooded vertebrates with small brains and reptilian nervous systems moving on two legs seem too remarkable.

Look at my masters, for instance. 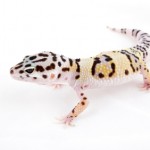 It is likely that what you saw was a zebratail lizard or a leopard lizard, which are related to iguanas and are fairly common around here.

Zebratails grow to 6 to 9 inches long and have black bars on the undersides of their tails. The book I looked them up in said that they are extremely hard to catch, but then I don’t know why you’d want to catch one anyway.

Leopard lizards are bigger, up to 15 inches, and are gray and brown with dark spots all over. Both kinds eat insects and other lizards and whatever else is handy.

The reason these lizards and some others sometimes run on their back legs is simple: It’s faster.

This I learned from the always-helpful Bill Sloan of the Arizona Herpetological Association. They usually run on only two legs when they are in a special hurry, such as when they are being pursued by predators.

Actually, lizards were on their own two feet long before humans.

The fossil record shows lizards that were bipedal 80 million years ago. And in South America, the basilisk lizard, also known as the Jesus Christ lizard, can run on water at up to 6 mph, which has to be a pretty good trick. But if I had to choose, I’d rather have a Mr. Peanut costume.