The territorial days were a period in medical history of great scientific breakthrough; however, most surgeons in Eastern medical citadels preferred to be conservative in their treatment. Doc Goodfellow epitomized many frontier surgeons. Limited in their facilities, they had no choice but to experiment if their patients were to have any chance at all.

The fearless physician, on more than one occasion, entered dangerous, smoke filled shafts to rescue miners trapped and injured in a mining accident.

He once performed plastic surgery on the face of a victim of an accident, then refused pay because the man had been injured while trying to help other victims. When the great earthquake struck Bavaispe, Sonora, in 1887, Doc loaded up his wagon with medical supplies and rushed to aid the survivors. To the people of Bavaispe, he became El Doctor Santo, (the “sainted” doctor) and was given a special medal by Mexican President Porfirio Diaz for his efforts.

When his good friend and colleague, Dr. John Handy, was shot down on the streets of Tucson, Doc Goodfellow boarded a train at Benson, took over the locomotive from the engineer and drove the trail at breakneck speed to Tucson in a vain effort to save Handy.

Doc Goodfellow had a proclivity for being on the scene when history was being made. He rode with the army on one of the last great Apache campaigns against Geronimo. During the war with Spain, General William Shafter used him as an envoy. Goodfellow’s fluency in the Spanish language made him invaluable in negotiating the final surrender following the battle of San Juan Hill. Doc attributed part of that success to a bottle of “ol’ barleycorn” in his medical kit which he properly prescribed to himself and Spanish General Jose Toral during the peace talks, lending a more convivial atmosphere to the conference. 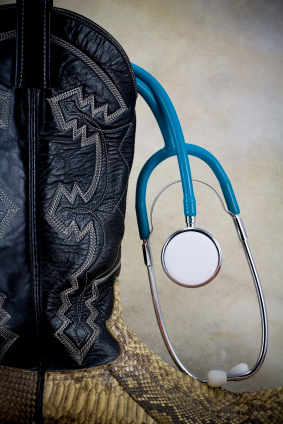 Doc Goodfellow was a participant in one of Arizona’s most legendary feuds. Following the shootout near the OK Corral in Oct., 1881, he tended wounded members of both factions. Before 19-year old Billy Clanton died with six bullets in him, Doc removed his boots. The young cowboy had promised his mother to “die with his boots off.” A few weeks later, the physician was called out to save the mutilated arm of Virgil Earp. Some four inches of shattered bone was removed from the lawman who had been ambushed by a shotgun wielding member of the opposing faction.

The next victim of the fighting was Morgan Earp. Morg was gunned down, again by ambush while watching a billiard game in Hatch’s saloon. One of the bullets passed through Earp and penetrated the leg of an innocent bystander named George Berry. Berry fell unconscious and expired soon after of shock, or as County Coroner Dr. Goodfellow “formally” stated in his report, Berry was literally, “scared to death.”

Doc Goodfellow is best known for his famous coroner report following the lynching of John Heath in the aftermath of the Bisbee Massacre in 1883 when five men held up the Goldwater-Casteneda store. As the bandits left the store and stepped out into the street, they shot and killed several citizens. The five were later captured and sentenced to hang legally. A sixth man, John Heath, helped plan the robbery, but did not participate in the killings. He demanded and got a separate trial, receiving a prison sentence at the territorial prison at Yuma. Most folks around Tombstone and Bisbee felt that Heath deserved the same punishment as his cronies. A vigilante group formed and, on Washington’s Birthday, 1884, removed Heath from the County jail and strung him up on the crossarm of a telegraph pole. This was the only lynching in Tombstone’s history.

Now lynching is illegal, even when the victim deserved it; however, it was up to the County Coroner to determine exact cause of death and whether or not charges would be pressed. Doc Goodfellow, County Coroner, had been present during the administering of John Heath’s “suspended sentence,” as had many of Tombstone’s usually law-abiding citizens. Some had even played an active part in the lynching.

The matter was resolved when the coroner’s report was issued. Doc Goodfellow, with his usual elan, ruled that John Heath died from “. . . emphysema of the lungs which might have been, and probably was, caused by strangulation, self-inflicted or otherwise, as in accordance with the medical evidence.”

George E. Goodfellow began his medical career as a contract surgeon with the army at Ft. Whipple. From there he moved to Ft. Lowell, near Tucson, for a brief stint. Finding army life dull, he set out for the boisterous new silver boomtown of Tombstone. He arrived in 1880 and for the next eleven years called the city on Goose Flat Mesa home. Doc Goodfellow set up his offices on the second floor of the Crystal Palace Saloon. Old timers said he actively maintained two offices, one upstairs and the other one on the ground floor. He socialized with Tombstone’s upper crust society but frequently escorted some of Allen Street’s more comely courtesans. He languished many an hour promoting horse races, wrestling and boxing matches. A former champion boxer, he had been expelled from Annapo¬lis during his undergraduate days for extra-curricular pugilism.

Dr. George Goodfellow’s sense of humor, sporting character and frequent imbibing in no way detracts from his research and practice as a medical physician. Goodfellow published 13 articles based upon his practice in southern Arizona. He was best known for his thesis on the treatment of gunshot wounds to the abdominal region.