Roadrunner Food Habits Are A Bash

Excerpt from Valley 101: A Slightly Skewed Guide to Living in Arizona, a collection of Clay Thompson’s columns for The Arizona Republic. (Originally published September 5, 2001.)

Today’s question: I’ve seen roadrunners running around with lizards in their mouths, but recently, I was surprised to see one grab a small bird, bash it against the ground several times and take off into the desert with the body. Is this normal?

Grabbed it and bashed it on the ground several times? I hope this doesn’t give my masters any ideas. Yes, what you saw was perfectly normal, at least for roadrunners. They cannot live by lizards alone. They also eat scorpions, snakes, rodents, small birds, eggs, insects and a few berries and seeds every now and then just to keep regular. 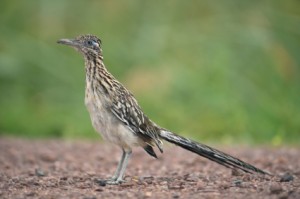 Roadrunners are not delicate creatures. They usually kill their prey by picking it up by the head with their beak and walloping it on a rock or the hard ground until it is dead. Then the bird swallows it whole.

In the case of something tough like a horned toad, a roadrunner might spend 10 or 15 minutes whacking it on the ground to kill it. They have such quick reflexes that they have been known to snatch hummingbirds and dragonflies out of the air in midflight.

Hummingbirds and dragonflies probably don’t find this to be all that great, but you have to admit it would be something to see. They catch rattlesnakes by spreading their wings out like a matador’s cape to keep the snake guessing. Then they grab it by the tail and flail it around until it’s dead. This is kind of gross: If the snake is too
big to swallow whole, the roadrunner walks around with the corpse dangling out of its mouth as it digests the other end.

I’m always surprised at how many people have lived here a long time without ever seeing a roadrunner. They prefer the wide open spaces where their speed—up to 15mph—works to their advantage.