Tribute to Melvin Jones on U.S. 70 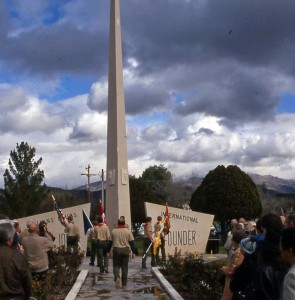 FORT THOMAS – There are very few distractions along U.S. 70 as it winds its way through the cotton fields and flatlands at Fort Thomas in southeastern Arizona. Mount Graham is a blue-gray mass on the horizon and a few other peaks rise gently from an otherwise level landscape. But suddenly, on the western edge of the community, a spire rises more than 50 feet above the semi-desert. What makes it unusual is that it’s standing there all by itself, with no church attached. A quick stop for an inspection reveals that it’s a memorial to Melvin Jones. Since a 50-foot obelisk doesn’t just pop out of the ground all by itself, this raises the question:

Who was Melvin Jones?

At least 1.6 million people from all over the world know the answer. Jones was the founder of Lions International, a worldwide service organization with more than 45,000 clubs across the globe. Jones was born at Fort Thomas in 1879; his father was stationed there as a member of the U.S. Cavalry. The Safford Lions Club financed the monument and dedicated it in 1965. There’s also a small museum on the site, but it’s open only once a year, on the Saturday closest to Jones’ birth date of January 13.

That’s when Lions from around the world gather at the monument to roar tribute to their founder.