Does Phoenix Have Its Own Area 51?

Excerpt from Valley 101: A Slightly Skewed Guide to Living in Arizona, a collection of Clay Thompson’s columns for The Arizona Republic. (Originally published February 9, 2003.)

Q: My friends and I often mountain-bike in the Dreamy Draw area. Recently one of the guys started talking about how a UFO crashed there in 1947 and was buried under the Dreamy Draw Dam. What’s up with that?

Personally, I’m not sure what I think about UFOs and ETs and all that stuff. They don’t seem very likely, but on the other hand, it would explain a lot of my masters’ behavior. And clothes. They just haven’t learned our Earth ways yet. But I digress. 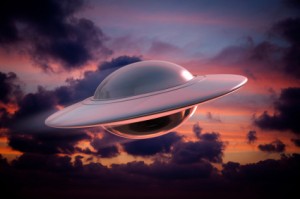 The Dreamy Draw UFO story, as you might expect, has several variations. One has it that in 1947, about three months after the famous UFO incident in Roswell, N.M., a UFO crashed somewhere in the Dreamy Draw area. Another version has the spaceship setting down in that area but actually crashing about 10 miles away near a Cave Creek landfill.

Supposedly, the remains of its two passengers, described as about 4½feet tall, were recovered. They were kept in some guy’s freezer for a while and then taken away by the military.

If you’re going north on the Squaw Peak Parkway, it’s off to your right a bit above Northern Avenue. I asked Ted Kester, who is in charge of the city’s mountain preserves in that part of town, about this, and he said he’d heard the legend but couldn’t recall anyone ever asking about it. So it’s not exactly a mecca for ufologists.