WILLCOX – Most fans of the old Western B movies watched Rex Allen fight the outlaws and rescue the heroines without ever realizing that he was once a cross-eyed country singer who performed at barn dances.

Fortunately for everyone involved (Allen and fans alike), he had corrective surgery shortly after his singing career took off in Chicago. But his eye problem is prominently mentioned on a bronze plaque placed next to his statue in Railroad Avenue Park in Willcox. The larger-than-life bronze sits across the street from the Rex Allen Arizona Cowboy Museum and the Willcox Cowboy Hall of Fame. 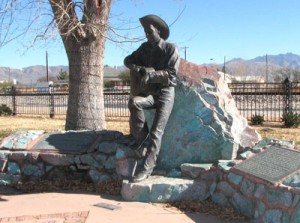 Allen was born in Willcox and got his start playing and singing with local bands before finding fame as a recording artist and movie hero. Allen portrayed a singing cowboy in 19 movies,  then moved on to television once the B Westerns rode off into the sunset. After starring as Dr. Bill Baxter for 39 episodes of the TV series “Frontier Doctor,” Allen found regular work as a narrator for a wide variety of Disney productions. He was also the voice of 150 Disney cartoon characters.

After his death in 1999, his ashes were spread over the park which also contains the remains of his horse, Koko.