TUCSON – The Pima County Courthouse has been a landmark here for eight decades, but it took a long time for the community to accept it because of a lingering controversy over the colors and style. But over the years, the Spanish Colonial Revival structure has become became a city icon. 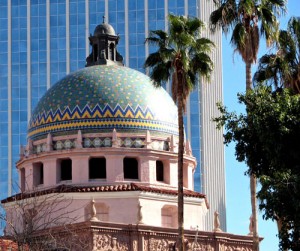 The building, designed by Roy W. Place and built by Herbert Brown, is the third courthouse to occupy the site. The first was erected in 1867 for $15,650. A brick building replaced the original in 1881 and served until 1926, when the current  structure was erected at a cost of $350,000. The main building was constructed of brick covered with stucco.

The dome is concrete covered with colorful ceramic tile. The combination of those two styles gives it both Spanish and Moroccan flairs.

The courthouse is located at 115 North Church Avenue in downtown Tucson, and it’s extremely photogenic from almost any angle.