Excerpt from Valley 101: A Slightly Skewed Guide to Living in Arizona, a collection of Clay Thompson’s columns for The Arizona Republic. (Originally published July 22, 2001.)

Q: There are so many places around the Valley with “ranch” in the name. How many were ever really ranches?


A: Lots of them. Lots and lots. Despite all the sprawl, you have to bear in mind that the Valley metro area started as a farming community, and until fairly recently, Maricopa County was primarily an agricultural area. So there were a lot of ranches. 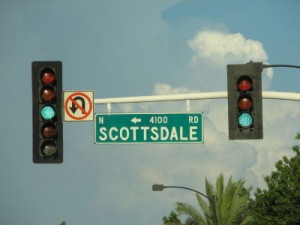 Not all of these spreads were exactly hardscrabble kinds of places. McCormick Ranch in Scottsdale, before it turned into a residential development, was the home of Fowler and Anne McCormick. Fowler McCormick’s two grandfathers were Cyrus McCormick, the inventor of the grain reaper, and John D. Rockefeller, so he wasn’t exactly hurting for cash. He later became president and chairman of the board of International Harvester.

In his day, the 4,200-acre site was a working ranch, and theMcCormicks raised Black Angus cattle. After Anne McCormick’s death, the ranch was sold in 1970 to Kaiser-Aetna. That company later sold off 1,120 acres, which is now known as Scottsdale Ranch.

Gainey Ranch, another ritzy Scottsdale address, was once a 640-acre Arabian horse ranch owned by Daniel C. Gainey. In fact, over the years three Daniel Gaineys owned the place. Most of it was sold in 1980 to Markland Properties for residential development, but the family held on to 80 acres to have a place to stable their horses during the annual All-ArabianHorse Show. TheGainey Trust later developed that site for retail and residential use.