Dose of HistoryValley of the Sun
Home›Dose of History›A Brief But Fascinating History Of The Hohokam: The Valley’s First Residents

A Brief But Fascinating History Of The Hohokam: The Valley’s First Residents

Most scientists believe the Hohokam arrived in Arizona from Mexico around 300 B.C. Apparently, they arrived with a strong culture intact and had an immediate influence on the area and the people already living here. In time their influence would be felt as far west as the Colorado River, to the east, New Mexico and north to the Flagstaff area.

The 13,000 square-mile watershed above the Salt River provided a reliable water supply. During normal years, the river was probably a hundred feet wide and five to six feet deep. The banks were held in check by tall stands of willow and cottonwood trees. Digging by hand without beasts of burden (the Spanish didn’t introduce oxen, horses or mules until the 16th-century) they engineered the largest prehistoric irrigation project in North America. Some of these were 30 to 40 feet wide and 15 feet deep. For construction tools they used digging sticks and stone hoes. Large woven baskets were used to haul dirt. It’s been estimated 50 men and women could dig about three feet a day. More than 250 miles of gravity-fed canals were in the Salt River Valley alone.

Twentieth century engineers have marveled at the masterfully designed canals. During construction of the Grand Canal, surveyors followed a prehistoric ditch and couldn’t improve on the grade. Other modern day canals also follow the grade set centuries ago by prehistoric engineers using primitive instruments.

Their main crops were corn, beans, squash, tobacco and cotton. They introduced the latter into today’s United States and produced fabric textiles. Unfortunately, few examples have withstood the passage of time. 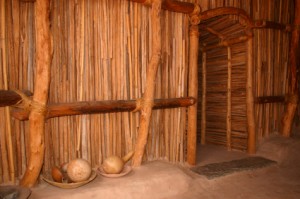 The Hohokam lived in pit houses during most of their 1700-year existence. These dwellings were submerged a foot or two below ground level, probably for coolness in the summer and warmth in the winter. The walls and roof were constructed of logs and brush, then chinked with mud. Outdoor brush ramadas were used for corn grinding, cooking and artistry.

The ability of the Hohokam to grow abundant crops and store huge amounts of food gave them extra time for relaxation. While other, less productive prehistoric people had to scratch out a living, these industrious aborigines designed and built athletic facilities for spectator sports. A rectangular ball park was sunk about five feet into the ground and played with a rubber ball and a grass hoop fastened on each side. Centuries later the Spanish found Indians in Mexico playing the same game. To make a score a player had to put the ball through the ring without using his hands. The game was low-scoring and much of the contest was devoted to wrestling and fisticuffs. When the game ended, the winner got possession of the losers clothes and jewelry—if he could catch him.

Plenty of leisure time also allowed the Hohokam to engage in arts and crafts. They developed a highly sophisticated multi-designed clay pottery believed by many to be the best ceramic work done in Arizona at the time. Pottery is the most durable art form from the era of the Hohokam and truly demonstrates the skill of these craftsmen-artists. The ceramics of characteristic red-on-buff color, was both decorative and functional. They included jars, bowls, pitchers, canteens, dippers and effigies and ranged in size from miniatures to huge jars that could hold more than 25 gallons. 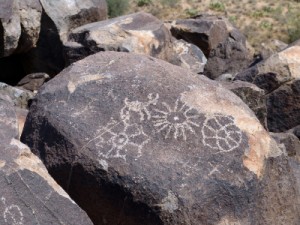 The decorations displayed delicate geometric and life form designs such as horned toads, deer, snakes, lizards, and people. Made from natural materials, the clay pottery was constructed by the paddle-and-anvil method and without the aid of a wheel. For knives, tools and other utensils, chert, obsidian and jasper were used. Stone axes were made from basalt. Monos and matates, the basic grinding tools of prehistoric peoples, were usually made from porous lava material.

The Hohokam have been called by some anthropologists, the Prehistoric Merchants of the Southwest. It is believed they acted as middlemen in a network of trade that extended from Mexico clear into the Great Lakes region.

From Mexico, they imported small bells which were hand-hewn from pure native copper and exotic birds. The latter provided colorful feathers for ceremonial events. Sea shells were imported from the Sea of Cortez. These shells were carved and ground into rings, bracelets, pendants and figures. Using pitch as a bonding agent they designed beautiful turquoise mosaics on the backs of the shells. The etching of life forms on sea shells was done with an acid juice from cactus plants. A figure or design would be drawn with pitch, then the shell was dipped into a weak acid solution. The unprotected part of the shell was dissolved by the acid, leaving the raised design or figurine. About 200 years later, this process would be “discovered” in Europe. Interestingly, evidence indicates that most of the fancy jewelry and face paint was worn by the men.

Exactly why they left remains a mystery. Did the great drought of 1276-1299 A.D. drive them out? Not likely, as their massive system of canals was substantial enough to sustain a prolonged drought. The long dry spell might have brought other, more warlike, peoples into the land of the Hohokam causing a cultural decline.

Perhaps the irrigation system was too efficient, causing the soil to become waterlogged. Did the soil become saturated with salt, or did warlike newcomers drive them away? Did they leave the area completely or are their descendants the Pima and Tohono O’odham peoples of today?

Perhaps there was a great epidemic decimating their numbers. Possibly the industrious, entrepreneurial segment of the culture moved on to greener pastures leaving the less-motivated behind. The standard of living of the Pima and Tohono O’odham was far below that of the Hohokam when the Spanish arrived in the 1500s. The Spanish recorded evidence of a great cultural upheaval but they, too, were mystified.

Perhaps the key to unlocking the secrets to this great culture still lies buried beneath this modern day metropolis of concrete, steel, glass and asphalt waiting to be discovered or uncovered by some futuristic civilization.