COCHISE COUNTY – Two huge Celtic crosses keep silent watch over the landscape here. One graces the Holy Trinity Monastery, a Benedictine community just south of St. David. The second is on a hillside overlooking Our Lady of the Sierras Shrine near Hereford. Both tower more than 75 feet over their surroundings, and both are the result of a journey Pat and Gerry Chouinard made to a shrine in Medjugorje, in what was then Yugoslavia. When they retired in 1995, the couple decided to build a similar shrine on their property near Hereford. 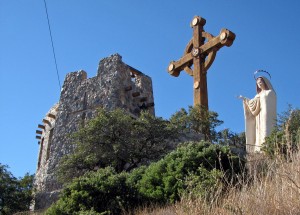 Giant cross at Our Lady of the Sierras Shrine near Hereford. Photo Credit: Sam Lowe

A cross was included in their plans and a Tucson company built a 75-footer. But neighbors objected and a court dispute followed. When it looked like they might lose, the Chouinards donated the cross to the monastery. But the courts later ruled in their favor, so they ordered another cross, identical to the first. Both are made of structural steel covered with concrete and fiber glass. The shrine at Hereford also features a 30-foot statue of the Blessed Virgin Mary and a small chapel.

The chapel is small (only 640-square feet) but sturdy because it was built with rock native to the area, and the interior is supported by huge wooden beams that were once part of an 1830s church in Michigan.

Both the shrine and monastery are Roman Catholic but are open to visitors of all faiths. The monastery is on Highway 80 near St. David.

The shrine is eight miles south of Sierra Vista just off mile marker 333 on Highway 192.