Mini-Taj in the Yuma Desert

It’s not as big as the Taj Mahal in India, but a little church in the desert north of Yuma was also built for the same reason — in memory of one man’s beloved companion. The Taj was erected between 1632 and 1654 near Agra, India, as a mausoleum for Mumtaz-I-Mahal, a favorite wife of Mogul emperor Shah Jahan. It stands about 330 feet tall at its highest points and features a massive double dome sitting atop a 260-foot pinnacle. An estimated 20,000 men worked on the project. 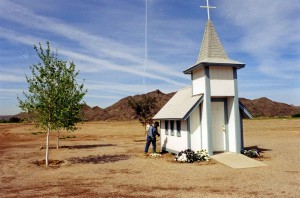 Yuma area farmer Loren Pratt’s tribute to his late wife, Lois, is a tiny wooden chapel that sits on a flat spot in the middle of his cotton and lettuce fields. The building stands about 15 feet tall  and can seat six to eight people. With the help of friends and relatives, Pratt constructed it in a few months in 1966.

The church is small on the outside, measuring about six feet by eight feet, and it’s even smaller inside. The pews hold one person comfortably but can accommodate two if they don’t mind sitting real close together. There’s a small podium in the front but few either deliver or listen to sermons, especially in the summer months, because there’s no air conditioning.

The chapel is located on U.S. 95 about 15 miles north of Yuma and is usually open to visitors during the daylight hours.