Excerpt from Valley 101: A Slightly Skewed Guide to Living in Arizona, a collection of Clay Thompson’s columns for The Arizona Republic. (Originally published January 2, 2000.)


Q: I admit that I’m not new to the Valley, but I have a burning question which in all my 36 years, I cannot answer. How did Bethany Home Road get its name? Is there such a place as “Bethany Home’’? I can understand how Camelback, Washington, Central, Indian School and just about all the other major thoroughfares got named, but not Bethany Home. Do you know? 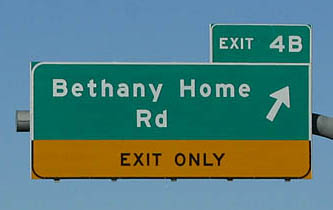 A: Do we know? Do we know? Do you think the state’s largest newspaper, a powerful media colossus such as Phoenix Newspapers Inc., a newspaper for the new millennium, would blithely hand over the awesome responsibility of teaching the Valley 101 course to someone who didn’t know something as simple as that? It is to laugh. Ha, ha.

Actually, no, we don’t know. Or at least we didn’t know until we asked around a bit.

We did know this much: It had something to do with tuberculosis.

Tuberculosis used to be a big business in Arizona. Around the turn of the century—you know, it just occurred to us that we can’t say that anymore without saying which century — tuberculosis patients routinely were sent to Arizona to be cured by the clean, dry air. Sometimes this worked and sometimes it didn’t.

The Sunnyslope area — which then was well north of the Phoenix city limits — was the site of many tuberculosis sanitariums, and Scottsdale was once known as “White City” because of all the white tents where the tuberculosis patients lived.

According to Lynch, the Bethany Home was a tuberculosis sanitarium operated in the early 1900s by a religious organization near what is now 15th Avenue and Bethany Home Road. Hence, the name.

Bethany, as you know, is an ancient town near Jerusalem at the foot of the Mount of Olives. In Hebrew, it means roughly “house of late-season green figs,” according to our dictionary.

And while we’re on the subject, for any really, really new newcomers, Indian School Road takes its name from a boarding school for Native Americans that the federal government operated at Central Avenue and Indian School Road until 1990. Much of the site is slowly being converted into a city park.

Excerpt from Valley 101: A Slightly Skewed Guide to Living in Arizona, a collection of Clay Thompson’s columns for The Arizona Republic. (Originally published January 2, 2000.)