Ghost Stories and Mysteries of Coal Mine Canyon

Coal Mine Canyon is one of Arizona’s lesser-known treasures because it’s easy to miss. And, perhaps, because of the ghosts.

There are no signs pointing to the canyon; the only markers are a windmill and watering tank on the side of the road southeast of Tuba City. But those who find it will be entranced by the multicolored hoodoos that rise sharply form the floor of the canyon to create a many-hued splash in an otherwise dull brown flatland. The hoodoos, shaped like those in Utah’s Bryce Canyon, are the result of underground fires and eons of erosion. They and the sidewalls of the canyon are colored in different layers. The black layer just below the rim is a seam of coal; the others are probably the result of combustion that caused some of the coal layers to burn so intensely that the shale turned red. 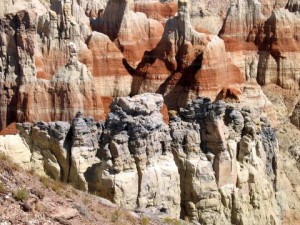 Overnight camping is allowed at the site but those who plan to stay after dark should know about the ghost stories told by both Native Americans and Anglos. They claim that on certain nights, when the moonlight dances across the hoodoos, a white mist rises from the bottom of the canyon and forms the shape of a beautiful young woman. The stories say the apparition is that of a young Navajo wife who once walked along the rim of the canyon with her husband and small child, who both fell to their deaths. The grief-stricken wife returned to the spot every night until she died, and now her ghost returns when the moon is full.

Miners have also reported they hear “knocking sounds” after dark.

Another bit of folklore deals with the Eagle Woman who fell into the canyon and was buried there, but climbed out of her grave and now appears occasionally to frolic in the moonlight. Others believe the ghost is Masaw, an omen of death. 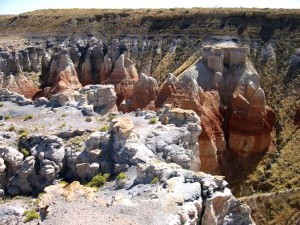 Coal Mine Canyon is located 16 miles southeast of Tuba City along Highway 264, between mileposts 336 and 337. Turn off at the windmill on the north side, cross a cattle guard and take the dirt road past the windmill for about a quarter-mile. Park, walk through an opening in a small fence and enjoy the view.

But if you go there at night, well…