Excerpt from “Valley 101: A Slightly Skewed Guide to Living in Arizona,” a collection of Clay Thompson’s columns for The Arizona Republic. (Originally published February 27, 2000.)

Q: What is the meaning of the stars with the names of old celebrities in them on the sidewalk at the northwest corner of Central Avenue and Monroe Street?

A: This was a deeply disturbing question, not because of the stars themselves, but because we had to get up off our pert little butt and actually walk over there and check it out.

And it occurred to us that we had trod that very stretch of sidewalk hundreds of times and never noticed the stars before.

The stars—eight of them—are a reflection of the past glory of the Hotel San Carlos, 202 N. Central Ave., which is still a very nice hotel, but at one time was Phoenix’s premier hostelry.

And when Hollywood stars were in town, that’s where they stayed. After all, it offered elevators and “automatic cooled air,” a kind of forerunner of air-conditioning, and ice-water spigots in the rooms. 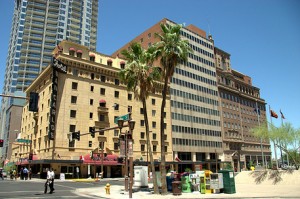 The stars in the sidewalk were put in in 1993 to commemorate the visits of luminaries of their day such as Kay Starr, Gene Autry, Tex Beneke, Les Brown, Jean Harlow, Harry James, Mae West and Clark Gable.

The San Carlos was completed in 1927 and was built on the site of Phoenix’s first school, an adobe building built in 1874. Dwight B. Heard — as in Heard Museum — financed the project.

For many years, it was where the Valley’s in crowd crowded in for lodging, dinner or dancing. It was famous for its onion soup.

The hotel was renovated in 1955 and today still retains many of its original architectural and design touches. Even one of the two original elevators still works and in the basement—and still working—is the well from the old school building.

One last thing—the San Carlos is said to be haunted. In 1928, a young woman, unlucky in love, jumped off the roof of the seven-story hotel to her death. She was wearing an evening gown, and every now and then someone will say they have seen the gauzy form of a woman in the hotel’s hallways and felt unexplained breezes.

And the ghosts of three young boys — perhaps spectral truants from the old schoolhouse — have been heard running through the halls, laughing.