There are many colorful rock formations spread across Arizona, and some of the more spectacular are located in Canyon de Chelly on the Navajo Reservation at Chinle. The most prominent is Spider Rock, a towering sandstone obelisk that rises almost 900 feet above the floor of the canyon. Others aren’t quite as spectacular, but they’re nearly as large and they look like gigantic slates, kids mittens and huge lumps of red clay that were just dumped there by some giant sculptor.

My favorite is near the mouth of the canyon. It doesn’t have an official name, like Spider Rock does, but I call it Nixon Rock because I think it resembles a profile of one of this nation’s former presidents. 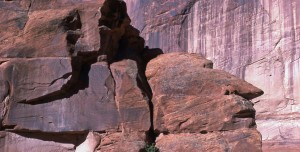 But on a recent trip with friends, I pointed the rock out and commented that it looks like Richard Nixon. One companion disagreed. He said it looks more like Bob Hope. Another friend said no, it’s the Indian head that used to appear on a nickel. We never did come to a consensus and still argue about it long after the trip.

So here’s a photo. Help us make a decision. Do you think this face-in-the-rock looks like someone famous? If so, who?