The World’s Smallest Museum in Superior

Even though it never gets any larger, the World’s Smallest Museum in Superior remains a work in progress. Owner Dan Wight never enlarges the museum itself, but he’s always working on improving the grounds that surround it. Like adding new fountains. The most recent one is made of old mining equipment; before that Wight constructed one out of old tires. 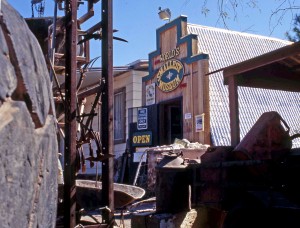 The museum itself is a mere 128 square feet of floor space enclosed in a tiny building, and it’s divided into 10 separate display areas, each about three feet across, two feet deep and six feet high.

This cuts down on big crowds because there’s room for only two people in the museum at one time.

The focal point is the roof, which Wight claims is the world’s largest roof built of empty beer cans. “It took 1,800 empties to finish the job,” Wight says, “but my committee did themselves real proud by furnishing 3,600 cans. Some of them are still recovering.”

The museum is located in the Buckboard City complex on U.S. 60 on the west edge of Superior.