Mining the Past at Castle Dome City

Fortunately, Allen Armstrong and his wife, Stephanie, are collectors, and what they collect is history in the form of old buildings. As a result, Castle Dome City lives on. In a way. 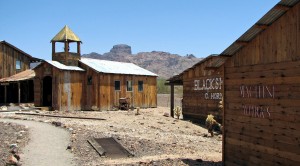 The Armstrongs have collected and restored more than 20 old buildings that were once part of the Castle Dome Mining District, a former major silver producer. The mining began in 1862 and was productive until 1978, when the last mine closed. The Armstrongs bought what was left of the town and began collecting artifacts that related to mining.

Now each restored building is a museum unto itself, holding such items as a pair of 1901 Levi’s, a giant bellows, newspapers and love letters written by lonely miners. The buildings include a dentist’s office, assay office, dress shop, hotel and jail, all of them weather-beaten with squeaky hinges and creaky floors.

The old town is well off the beaten path, about 32 miles north of Yuma on U.S. Highway 95. Watch for a small sign on the east side of the road at Milepost 35. Turn to the northeast and follow the signs for 10 miles. The first two miles after the turnoff are paved, the last eight are well-maintained gravel. Call 928-920-3062 for more information.