The Big, Bad Bulldog of Winslow

Dog parks are not unusual in Arizona, but there’s one in Winslow that takes the concept up to a higher level. It’s called Bulldog Park because it’s home to what may be the world’s largest bulldog. The site is on a strip of land that covers no more than 150 square feet and was formerly a weed-filled boulevard. But a local committee cleaned it up and installed what appears to be a giant guardian to make sure nobody messes around with the park. Or in it. 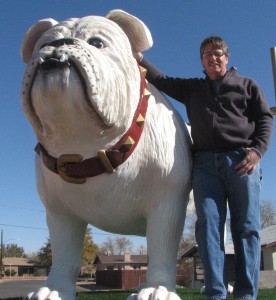 The bulldog is made of fiberglass figure, stands six feet tall and measures 10 feet long. It sits on a pedestal near Winslow High School, and was purchased online by Winslow resident Glenn Howeth, who donated it to the park. The original plan was to place it at the high school because its athletic teams are nicknamed the Bulldogs. But that changed when the citizenry got permission to clean up the plot of land, alter traffic flow and install the statue. Now the dog’s primary purpose is to intimidate visiting teams because they have to drive right past the big snarler to get to the high school.