The Hoo-Doos of the Chiricahua Monument

The Chiricahua National Monument in southeastern Arizona is one of my favorite places because of the spectacular rocks. Officially, they’re the result of the Turkey Creek volcanic eruption that occurred more than 27 million years ago, but I look at the formations and think of cartoon characters (one looks like a giant mouse) and crinkly spires that resemble giant trolls waiting to pounce upon the unwary traveler and demand coinage for safe passage. 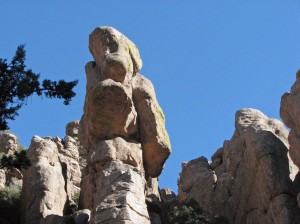 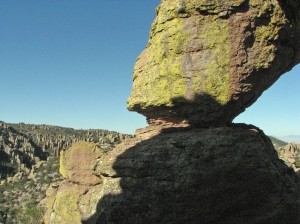 Some of the rocks are balanced on top of each other. One, known as Big Balanced Rock, supposedly weighs a thousand tons resting on a narrow pedestal, and I wonder how much Crazy Glue it took to make sure it doesn’t topple over. At another point along the eight-mile paved roadway leading through the monument, there’s a formation that looks just like Geronimo lying on his back, staring at the sky.

The assortment of grotesque spires and hoo-doos once served as hiding places for the Apaches as they waged guerilla warfare against the U.S. Army. The monument, located in the Coronado National Forest, is about 32 miles southeast of  Willcox. For information, call (520) 824-3560 or log on to www.nps.gov/parks.