The Partial Resurrection of Fairbank in Southern Arizona

FAIRBANK – In its prime, this was the site of a hotel, school, mercantile, several houses, stage depots and four railroads. Not bad for a town which, even at the height of its popularity, had only about 500 residents. But those days are gone and Fairbank is now a mere remnant of its glory days as a center of mining activity. Now, however, there’s a valiant effort underway to make sure those days aren’t forgotten, as well.

The Bureau of Land Management acquired the Fairbank Historic Townsite more than 25 years ago and appointed an archaeologist to oversee a stabilization and restoration project on the few remaining structures. 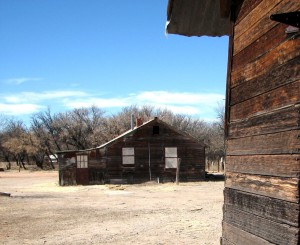 An old schoolhouse was the primary target because it was one of the few buildings that could be restored because it didn’t have any serious structural damage. It was built in the 1920s to replace the original school that was destroyed by fire. (The town was also hit by flooding and an earthquake during its short time as a community.)

Others scheduled for stabilization include an old house, a stable and a two-seater outhouse. The old store may also be partially restored; other buildings will be maintained only to prevent further deterioration.

Typical of most mining boomtowns, Fairbank went into decline in the 1940s. The last class left the school in 1944 and by 1950, the town had technically ceased to exist. The restoration started in 1999, and the site is now open to visitors, many of them former residents who go back, look around and mutter, “Well, the old place ain’t changed that much.”

Fairbank is southeast of Tucson off I-10. Take State Route 90 south to SR 82 at Whetstone, then follow 82 east for about 10 miles, just across the San Pedro River.