How did Sky Harbor International Airport Get its Name?

Excerpt from Valley 101: A Slightly Skewed Guide to Living in Arizona, a collection of Clay Thompson’s columns for The Arizona Republic. (Originally published January 14, 2001.)

Q: How did Sky Harbor International Airport get its name?

A: We take up this question with some reluctance because the entire staff and faculty of Valley 101 has a deep abhorrence of airports, which extends to even writing about them. At the same time, however, we always thought Sky Harbor was a cool name, in a 1950-ish, let’s-go-out-to-the-airport-and-watch-the-planes-land kind of way.

Actually, the name Sky Harbor goes back to 1929, a fact we found in Desert Wings, a history of the airport written by Michael Jones, a city Aviation Department employee. 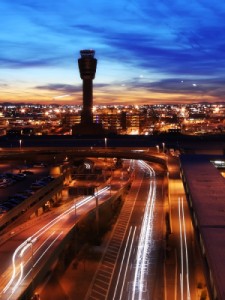 According to Jones, Sky Harbor was named by J. Parker Van Zant, the owner of Scenic Airlines, who came here in 1928 looking for a Phoenix base for his company, “The Rainbow Route Across the Grand Canyon.”

There already were three airports in Phoenix, but Van Zant wanted his own place, so he bought 278 acres of cotton fields east of 24th Street and south of the Southern Pacific railroad tracks and turned it into a landing field.

According to Jones: “By February of 1929, the airport was officially titled Phoenix Sky Harbor Airport. Whether the name came from a desire by Scenic to name all its airports Sky Harbor or by the idea of a “harbor” for aircraft, no one knows for sure.”

Scenic went broke later that year and sold the airport to a group of local investors, the Acme Investment Co.

In 1934, Acme leased the airport to Maricopa County, but the county backed out of the deal a year later. Acme pushed the city to buy the airport, and the city resisted until American Airlines, which had been using SkyHarbor since 1930, threatened to cut off passenger and airmail service. The city relented and bought the airport for $100,000 in July 1936.