The (Mis)Truth About Montezuma’s Castle

Although the history of Montezuma Castle is pretty well documented, considering that nobody wrote down much of anything when it was a hot spot of ancestral civilization, there’s this one thing that sticks out as a case of mistaken identity. Or make that, mistaken transplantation. 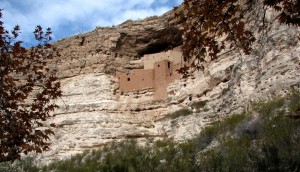 Montezuma, the great Aztec leader, had no association whatsoever with the ruins that bear his name near Camp Verde. In fact, he was never in Arizona. What happened all those years ago was that early White settlers mistakenly figured that the structure had been built by Aztec refugees who fled Mexico during the Spanish conquest. But scholars have since determined that neither Montezuma or any of his followers made it this far north.

Despite that, the misnomer remains, with some slight bureaucratic adjustments. Now it’s properly known as Montezuma Castle National Monument. The structure is well-preserved because it is situated in a cliff recess about 100 feet above the surrounding valley. Visitors can look but not touch because the ladders that once allowed entry have long since deteriorated. Those who want to go take a peek can get there by taking Exit 289 off I-17 at Camp Verde.