Why is Tucson a Few Degrees Cooler than Phoenix?

Excerpt from Valley 101: A Slightly Skewed Guide to Living in Arizona, a collection of Clay Thompson’s columns for The Arizona Republic. (Originally published June 13, 2001.)

Q: If Tucson and Phoenix are both in the desert, why is it always just a little bit cooler in Tucson than it is in the Valley?

A: Tucson is usually a little bit cooler than Phoenix because it is a little bit higher up. You may not actually have a sense of ascending when you drive there because you are lulled into a state of semiconsciousness because it is the most boring drive in the world. 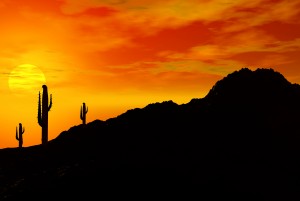 Phoenix’s elevation is 1,107 feet. Tucson’s is 2,550. Air cools as it rises because the pressure on it drops. Rising air cools at a rate of 5.4 degrees per 1,000 feet and sinking air warms at the same rate. That is called the dry adiabatic lapse rate.

Adiabatic is a good word, don’t you think? It means that heat is not being added or taken away, but since not many people probably know that, you could use it anyway you want. As in: “My car needs more adiabatic.” Or “Your tie is too adiabatic.”

So the dry adiabatic lapse rate would mean that all else being equal, you could expect Tucson to be about 8 degrees cooler than the Valley.

That’s nice for the people who live there, I suppose, but I’m still not sure it’s worth the drive.