Arizona Geography Trivia: Can You Pass?

Test your knowledge of Arizona Geography with this short quiz, originally published in Marshall Trimble’s Official Arizona Trivia. Don’t scroll down too quickly. The answers are posted shortly below the questions. When you’re finished, leave a comment with your score. Did any answers surprise you? 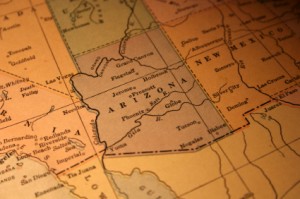 1. Name one of three Arizona dams named after U.S. Presi­dents.

2. What mountain range is north of Tucson?

3. What Indian reservation is located completely within the boundaries of another?

4. The historic Q Ranch in bordering Pleasant Valley (Young, AZ) is in the area of which two feuding families?

5. What is Arizona’s longest river?

8. Which rim of the Grand Canyon is higher, the north or south rim?

9. What city is located near Lynx Lake?

10. What northern Arizona mountain range was named by early Spanish missionaries for their patron Saint?

11. On what Indian reservation is Kitt Peak Observatory located?

12. Compared to all the states, does Arizona rank third, fourth, sixth or ninth in terms of land area?

13. What is Arizona’s largest state park?

14. Which city is highest in elevation: Nogales or Bisbee?

3. Hopi (surrounded by the Na­vajo Reservation)