Excerpt from Valley 101: A Slightly Skewed Guide to Living in Arizona, a collection of Clay Thompson’s columns for The Arizona Republic. (Originally published April 6, 2003.)

Q: What happened to the SH Mountains? I can’t find them on any maps anymore.

A: Nothing happened to them. It’s not like they disappeared or something. It’s just that over the years they got renamed, and rightly so. They are now known as the Kofa Mountains, located about 70 miles northeast of Yuma. 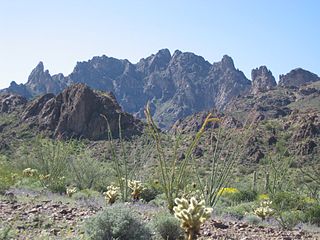 The SH Mountains were so named back in the 1800s either by miners or soldiers who noticed that from a distance they resembled outhouses. I will leave it to you to figure out what SH stood for. Suffice it to say, it is not a word one would expect to read in this newspaper.

In the interest of delicacy, the SH range was also known over the years as the Short Horn or Stone House mountains until the mapmakers finally settled on Kofa.

There was a town of Kofa, in Yuma County, which took its name from the nearby King of Arizona mine, which used to mark its corporate possessions with the brand K of A.

The King of Arizona mine was discovered by Col. Charles Eichelberger in 1896. Over the next 14 years, the mine produced something like $3.5 million in gold ore, which, of course, was a lot of money in those days. The post office in booming Kofa was opened in 1900 but closed in 1928.

As always in these matters, I turn for help to Arizona Place Names by Will Barnes and Arizona Names: X Marks the Spot by Byrd Howell Granger.