The Big Indian Head of Winslow 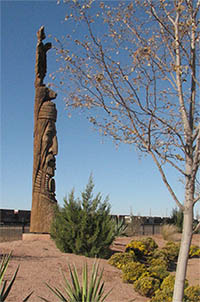 WINSLOW – Peter Wolf Toth arrived in Winslow in 1979, intent on adding one of his art works to the city’s landscape. When he left about four months later, he had turned a single ponderosa pine log into a 30-foot tall Indian head, and he left it there for posterity. The work was one in Toth’s series of giant heads that he carved in every state and four Canadian provinces. He called the effort “The Trail of the Whispering Giants,” and dedicated it to what he considered the mistreatment of Native Americans by early settlers and the federal government.

Toth applied about 100 coats of preservative to the finished sculpture before leaving it in the hands of the local citizenry for upkeep and safekeeping. It now stands in a city park adjacent to the railroad tracks, about two blocks southwest of the Standing On the Corner in Winslow Arizona Park. Toth’s last sculpture in America is located on the North Shore of Oahu, Hawaii.