Why Does Downtown Phoenix Seem to Have Two Downtowns?

Excerpt from Valley 101: A Slightly Skewed Guide to Living in Arizona, a collection of Clay Thompson’s columns for The Arizona Republic. (Originally published March 12, 2000.)

Q: Why does Phoenix seem to have two downtowns — one “downtown” and then another grouping of high-rises farther north along Central Avenue?

A: Because many years ago, the city fathers and mothers thought big. 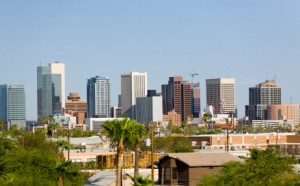 Unfortunately, they also thought wrong, or at least incorrectly.

The result is today we have a downtown downtown and downtown uptown, although we know of people who think of anything south of Northern Avenue as being practically the inner city.

According to Dave Reichert, head of the Phoenix Planning Department, back in the 1960s, when we only had one downtown and it was downtown, the city’s leaders had dreams of grandeur.

“They wanted to create a new downtown, almost like a Manhattan, and they expanded the (core area) all the way to Camelback Road between Seventh Avenue and Seventh Street,” Reichert said.

Several banks and other businesses promptly trotted off up Central to raise new offices, the idea being that the rest of the corridor between them and downtown would soon fill up with soaring highrises.

Obviously, it never quite happened, and between 1972, when Reichert came to work for the city, and 1985, when a new general plan was adopted, enthusiasm from theWashington-to-Camelback, Seventh to Seventh idea waned.

Today, the official vision of downtown is narrowed to First Avenue to First Street and north to Camelback.
A number of factors dimmed the original vision, Reichert said.

For one thing, the air pollution and traffic problems came to be bad enough as they were. Jamming thousands more people and cars into acres and acres of high rises would have strangled us.

For another thing, new technologies, new economies and new corporate structures meant companies didn’t need huge high-rises to hold everybody they needed to do the job. A midrise building now may do where a 30-story high-rise was called for before.