Why Don’t Palm Trees Blow Down in the Wind?

Excerpt from Valley 101: A Slightly Skewed Guide to Living in Arizona, a collection of Clay Thompson’s columns for The Arizona Republic. (Originally published August 8, 2001.)

Q: Why don’t palm trees blow down in strong wind as often as other trees do?

A: I thought this was going to be an easy one, and I was prepared to pad it out with a lot of cheap jokes about my masters.

Instead, it got kind of complicated, so I had to cut out the jokes, which is just as well because I would have had to explain them to my masters anyway.

This is the deal: Palm trees are monocots as opposed to other trees, such as paloverdes or oaks, which are dicots. 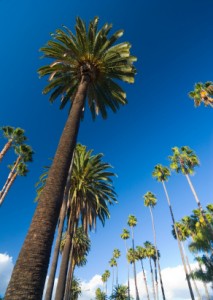 Kim Stone, a horticulturist at the Boyce Thompson Arboretum near Superior, went to some pains to explain the differences to me. He is a very patient man.

Basically, monocots, which include grasses, orchids, irises and other stuff, have embryos that sprout straight up in a single shoot, instead of up and out with branches, as dicots do.

A palm grows straight up, gaining its height on overlapping leaf bases. Hence, it doesn’t have branches to catch the wind. A big, branchy Norfolk Island pine, on the other hand, would just as soon blow over as look at you.

If you took a cross section of a palm tree, you would find a number of brownish spots instead of the growth rings like you’d find in a dicot.

These are bundles of vascular strands that carry nutrients up and down the tree. It’s like a thick steel cablewoven from a lot of smaller steel wires. This is starting to make my brain hurt.

Anyway, each strand in these vascular bundles is connected to the root system. Dicots have woody roots, and in most dicots, 80 percent of the root system is within the top two feet of soil.

Anyone who has ever tried to dig up a palm can tell you it has fibrous roots that not only fan out to great distances but also go down deep. Like to somewhere down around the tectonic plates. So all this combines to give a palm tree a very solid base in the ground and a very supple trunk that will bend in the wind without breaking.

Excerpt from Valley 101: A Slightly Skewed Guide to Living in Arizona, a collection of Clay Thompson’s columns for The Arizona Republic. (Originally published August 8, 2001.)